Serviceberries, Amelanchier spp., are an ideal sized tree for most landscapes. Sometimes considered large shrubs, serviceberry trees are usually grown in clumps with many upright branches, although they can be trained to a single trunk. They reach sizes of 25 feet tall by 15 to 20 feet wide. Amelanchier is one of those trees whereby the common name can sometimes make it difficult to identify. In addition to serviceberry, these trees are also known by Saskatoon, shadblossom, shadbush, shadwood, Juneberry, mountain blueberry, or sarvis-tree. Being a native tree to woodland borders and hillsides in eastern North America, settlers who encounter and admired Amelanchier contributed to the multiple common names it now carries. One name, serviceberry, originated because branches were collected in mid-winter and forced into bloom for church services. 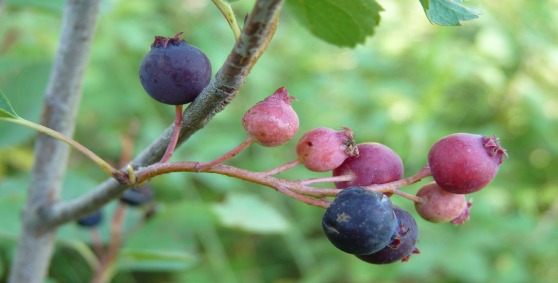 Serviceberries make great landscape plants because they offer multiple-season interest. In early spring, even while most woody plants are still dormant, small buds open to reveal clouds of white blossoms on serviceberry trees. The flowers are very ornamental but reach their peak in only a few days and fade away just as redbud’s rosy pink blooms take over the woodlands. Serviceberry leaves follow their blooms and first emerge as silvery-gray and fuzzy. Their summer color is medium to dark green with fine teeth along their edge, similar to their close cousin relative, the apple. Serviceberries are considered a top choice for fall color of the small trees. Color can range from bold yellow to brilliant red, depending on the variety. Once the leaves fall, the ornamental, light gray bark, streaked with a reddish cast, adds an attractive feature to the winter landscape. As the tree matures the bark becomes more ridged, furrowed and scaly.

My favorite reason for planting this tree however is the fruit. In June, small purplish-black ‘berries’ ripen on the tree, hence another common name – Juneberry. If you are faster and more alert than the birds, you can eat these sweet, blueberry-like fruits (technically called pomes) straight from the tree, baked in pies, or processed into jam and preserves. Although all Amelanchiers have edible fruit, A. alnifolia, often called saskatoons, are grown for their superior fruit quality.

Serviceberries can be planted in part shade to full sun and are extremely adaptable to soil types. They have moderate drought tolerance and are medium to fast growers, reaching 9 to 10 feet tall in 5 to 6 years. Being a relative to apple, it shares some of the same diseases. However the species and many cultivars have improved resistance to most insects and diseases. In the few years I have grown this tree, I have only seen a limited amount of fire blight injury. This tree will rarely need any pruning, unless you are training it to a single trunk. Neither will it need additional fertilizer.

Place serviceberry at the corners of buildings, or use as informal hedges, in a naturalistic planting, or against an evergreen background so its white blooms and fall color will stand out. Serviceberry is also a great tree for wildlife. Birds relish the fruit. Tiger butterflies and viceroy larvae use serviceberry as a food source. And bees, beetles, and butterflies are all pollinators of its flowers.

Of the many species of Amelanchier, A. arborea is most commonly found in the nursery trade. There are many excellent cultivars of this species to consider. The most popular include:

• ‘Autumn Brilliance’: Noted for being a faster grower than the species and its brilliant
red fall color.

Serviceberry trees are members of the rose family. There are 18-25 species of serviceberries in the United States. Identifying a serviceberry to the species level can be difficult because of strong physical similarities and a strong tendency for interspecies to hybridize.